We’ve moved house. As alluded to in previous postings, we made some necessary endings and some necessary beginnings. And so we have transitioned from life in the suburbs to an inner city area of Birmingham that is incredibly diverse ethnically and culturally. By way of illustration, a local junior school has 230 students speaking one of 44 different languages. The Home Office places asylum seekers here, and it also attracts other immigrants who have somehow made their way into the UK.

And so, we have moved. At least, all our stuff is moved. Our brains seem to be travelling through several geographical areas between Shirley and Winson Green. Between painting, cleaning, and unpacking boxes, we find ourselves starting one thing, turning around to see another thing that needs to be done, and before we know it we have started five different tasks and completely forgotten the first one we started! Hysterics are not uncommon, including a little tension as we debate the placement of household goods amidst the adjustments to a new place, new people, new team, new culture(s), and new responsibilities.

Not to be left out, Destiny and Angel have decided to contest the move by competing to deposit the largest hairball in the most inconvenient of places. I suppose they might be trying to match the paint scheme of a few rooms the previous residents had painted the colour of cat sick. We are hastening to paint over these with something more digestible! We hope the girls calm down a bit and groom themselves and each other a bit less and stop the throwing up noises at 5.30am. We don’t need that kind of consistent alarm each morning!

The excessive grooming, we surmise, is a way of comforting themselves and each other in the tensions and discomfort of losing what was familiar and being forced to embrace the unfamiliar. I wonder, as both cats somehow manage to occupy my lap while I tap my computer keyboard, what ways I am accomodating to my unfamiliar surroundings which will result in coughing up the human equivalent of a hairball? Hardly worth imagining and certainly not appealing.

In such circumstances (indeed, as in most every circumstance I can imagine) hubris is not appropriate. 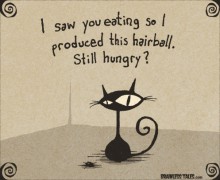 Defined as ‘excessive confidence or arrogance,’ hubris in this new environment would effectively block learning, growing, effectiveness and fruitfulness. Hubris as a means of self-comforting might bring temporary relief, but produce hairballs none would find attractive. Destiny and Angel might not care about such things, but our local and wider team certainly would be put off, not to mention those we are seeking to befriend and influence.