For Day Eight of ’30 Days of Thankful’ I am grateful for the simple joy of playing ice hockey. In case you didn’t realize it, ‘hockey’ in England is something else entirely, hence the specific designation ‘ice hockey’ is given to differentiate the two. Might seem redundant to a North American audience, but this is the country where news presenters start their daily broadcast with ‘Hello, good morning’ or ‘Hello, good evening’ at the end of day news and weather. Still makes me chuckle and say to myself “Why do they say that?”

When we moved to England in 1994, I hadn’t played ice hockey since I was 17 in Minnesota, and could count twice in 17 years that I had even skated. So 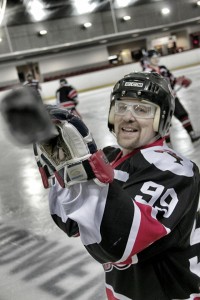 shortly after I turned 34, in terrible need of some form of exercise, I began playing with a local recreational team here in Solihull. Five minutes into the first training session I was off the ice emptying the contents of my stomach; yes, I was that unfit. Now that I’m 52, I’ve been back playing for nineteen years. Reminds me of the first training sessions where the lad next to me said, ‘I can’t wait until I turn 21 and don’t have to wear a faceguard anymore.’ ‘How old are you?’ I asked. ‘Nineteen,’ he replied. I felt old at thirty-four!

And yet, there’s not many forms of regular exercise that bring me as much joy as a skate and a shot in the back of the net and giving and getting a body check. Running? Boring. Swimming? Boring. Lifting weights? OK, I’ll do that because I can listen to music, podcasts, and sermon messages that feed my mind. Ice hockey? A blast!! Always (OK, except for that time when Baz checked me from behind and cracked two of my ribs).

I’m now on my fourth rec team, having played with the Vikings (still going), Wolves (folded), Vipers (folded), and now the newest team, the Senators (jury still out if this team will make it). I’ve met some of the greatest guys playing over these years, the vast majority who speak two languages (fluent in cursing and some who can even speak English; OK, there are some other Eastern European players but who knows what they are saying when they are not speaking English!) I’ve got a lot of time for a some of these guys, because their hearts are big and they still care and love and garner respect from others even if their edges are rough. I’ve got a few stories to tell from all these years, most needing cleaning up before being re-told; good memories are many.

So, to my heavenly Father who has given me the simple joy of playing ice hockey and the friends and memories that have come from it, especially in this land dominated by cricket and football (not American football), I am thankful to you and full of joy for this grace.